Yet it all started with two local farming brothers from Kimba with a bold vision and the courage to realise their dreams.

Two brothers with one vision

In 1950, Lloyd and Fred Ramsey took their first steps towards a new agribusiness with the purchase of the Kielpa General Store and a transport operation.

Seven years later, the brothers moved their headquarters to Cleve acquiring more land and expanding their operations before taking over the Massey Ferguson franchise.

Through hard work and sound management, the business grew.

By the end of the 1950’s, Lloyd and Fred had added the Waymouth Motor Co., the Chrysler vehicle franchise and, in 1960, an electrical, radio, television and hardware division. Further expansion in the 1960’s included a crash repair shop and the development of the original trucking business before Simmons Department Store and Cleve Furniture Store were also brought under the company’s umbrella.

Diversification was unlocking a host of new opportunities and Ramsey Bros went from strength to strength. 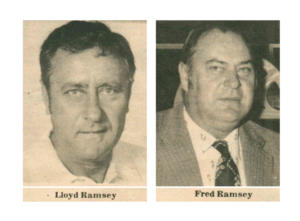 In the 1970’s, the second generation began their journey in the business as Lloyd sons-in-law, John Marshall and Eddy Ward and Fred sons, Brian and Andrew Ramsey, joined the team.

More local businesses were acquired and by 1977, the Ramsey Bros premises on Main Street, Cleve was the co-ordination centre for all machinery and car sales with new branches opening in Tumby Bay and Cummins.

In 1980, Fred Ramsey was killed in a car crash and then in 1983, tragedy struck again when Lloyd Ramsey also died as a result of a road accident.

The loss was almost unfathomable for the family, and the tightknit Eyre Peninsula community which had supported the brothers and their business from the beginning.

Yet from grief came strength and a determination to honour Lloyd and Fred’s vision.

The second generation of Ramsey’s stepped forward to run the business with Eddy Ward assuming the role of General Manager.

Since that time, Ramsey Bros has acquired the Case IH franchise which led to opportunities and expansion in Cummins, Kimba, Wudinna, Riverton and Murray Bridge.

The third generation entered the business in 1996 with Mark and Hamish Ward, joined by Lincoln Ramsey in 2000.  The company’s consolidation continued under their skillful leadership and a decade later an administration office was opened in Adelaide to provide oversight and co-ordination.

OUR BOARD OF DIRECTORS AT THE CUMMINS BRANCH OPENING; 3 MARCH 2005.

Find any New or Used Machinery